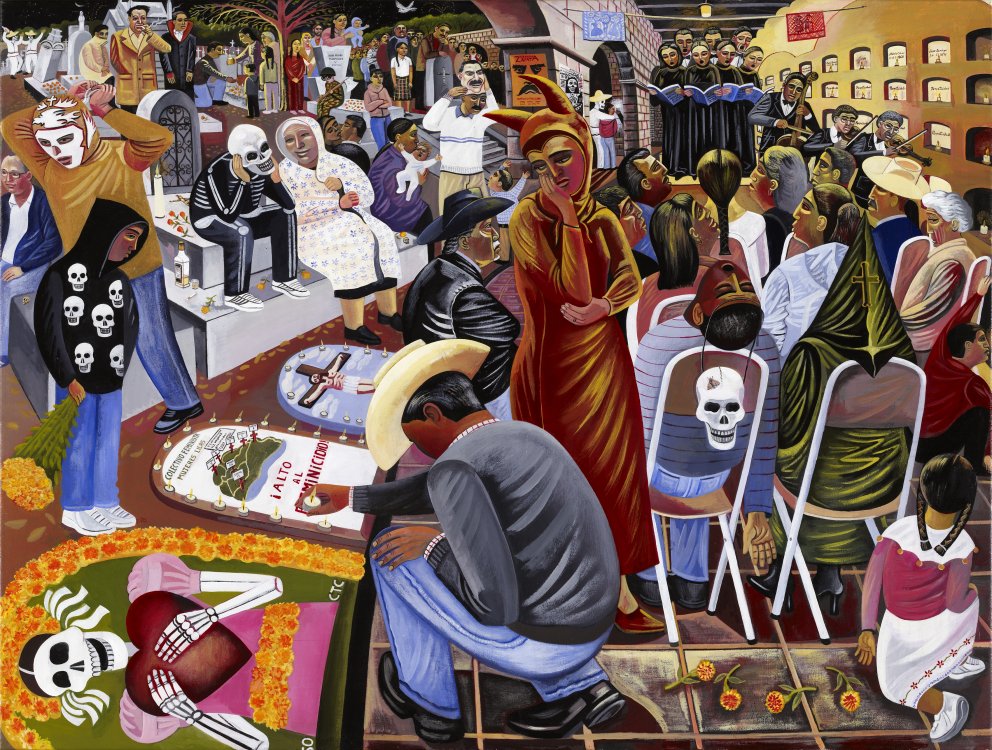 Acrylic paint, chalk, charcoal and glitter on canvas 160cmx120cm Collection of the artist

In Mexico in Oaxaca’s Pantheon General Cemetery accompanied by our friend the film maker Michael Holland we come across an orchestra playing Mozart’s Requiem on the night of the Day of the Dead celebration. Listening to the beautiful music I know I want to paint the scene but I haven’t come here to draw because it didn’t feel right to do so. Consequently I’m on edge as I don’t have my sketchbook and pencils with me to record a scene so full of emotion and beauty and music. I begin to soak up the faces and small incidents so I can get it all down on paper back at my studio in Oaxaca. 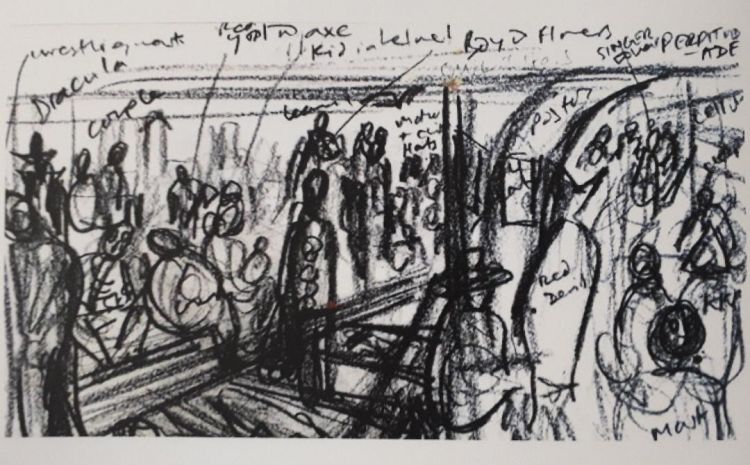 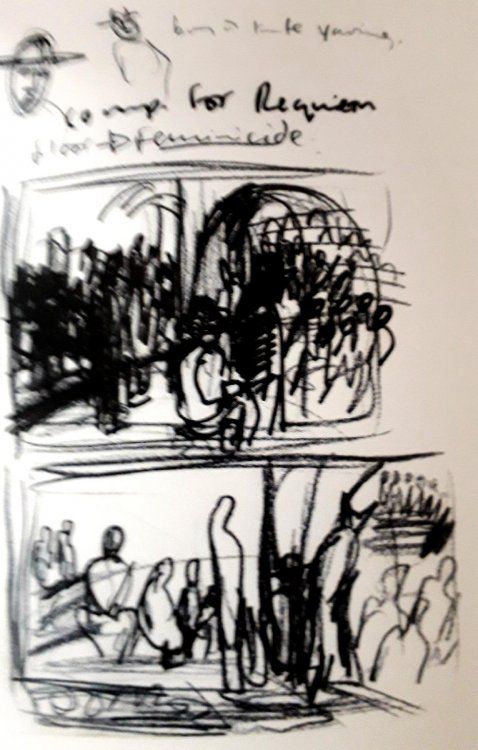 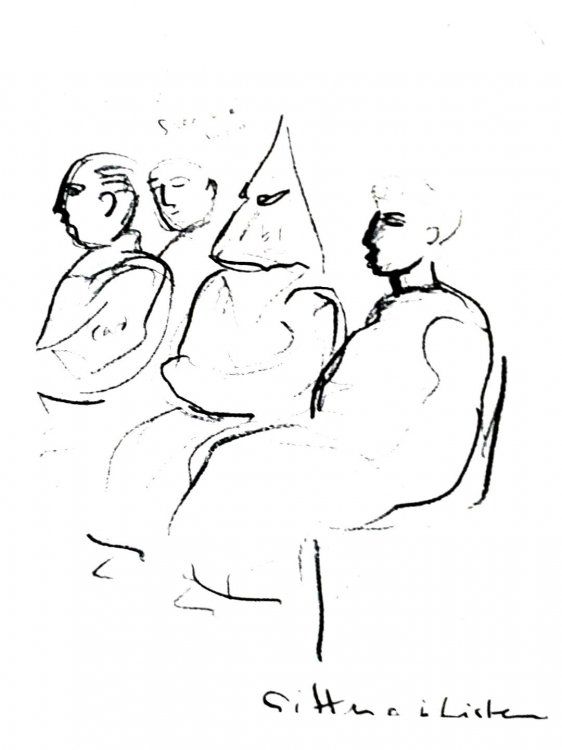 The final version of this painting is a requiem, but it’s more than a painting of people commemorating their dead loved ones. At first I lose may way in frustration, not knowing how best to structure the scene. There is so much detail to include, all from memory, and my mind is buzzing and alive but my hand is dead. I struggle on in the studio doubting my right to paint such a scene, as a foreigner, a gringo, as a stranger, a hooded man, an interloper. I had stumbled across a scene that contained so much of ancient Mexican society and modern Catholicism. Here were people at their most tender, most loving. I hadn’t even taken a sketchbook. What if my memories became a caricature instead of a reflection on a social reality?

These difficulties were made easier by visits from friends and creative breaks from the studio in the pool, good food and tequila. I was a true gringo and the irony was not lost on me. In fact I was a gringo in limbo. In time I began to see that this was a painting of two halves- the living half consisting of orchestra and choir, was a celebration of life and art- and the dead half in the tombs and cemetery was another celebration of lives lived. We are in between the two, our little lives rounded by sleep.The dead surround us, in the tombs and under the earth. Our existence is temporary, theirs is perpetual. In fact, in the final painting and in the cemetery itself, we are placed below the dead. The cemetery and tombs rises above us, protecting us. 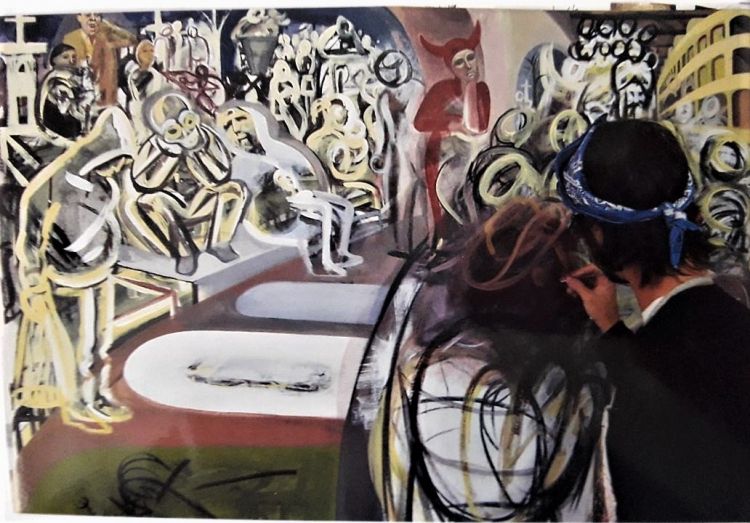 In the studio in Oaxaca 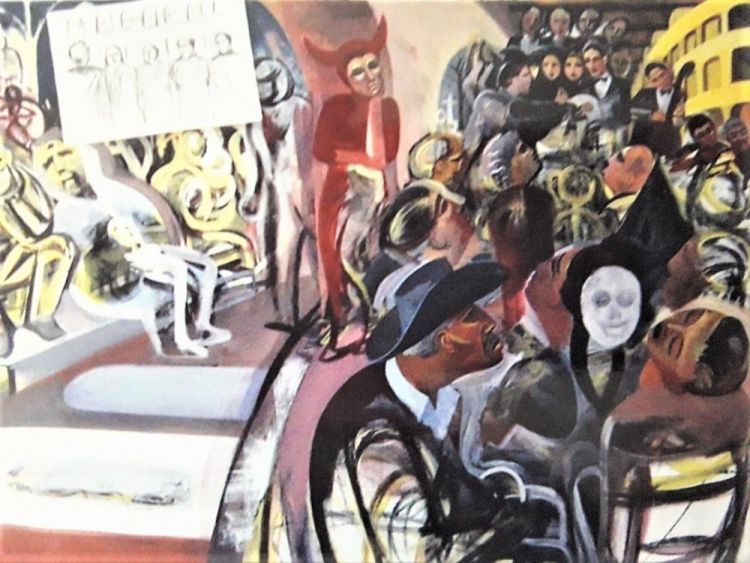 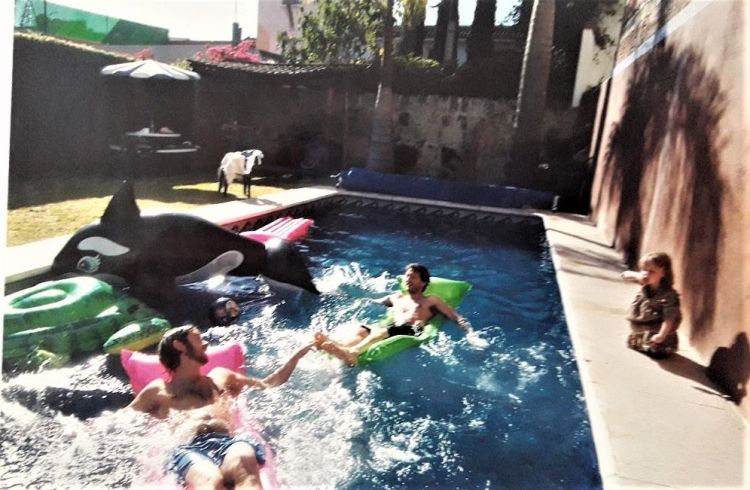 Then after a month of painting, whiting-out and repainting, a new painting emerges. I begin to understand that this painting is about women. The strength of the Mexican women that I saw in the streets around our home had deeply effected me. In the cemetery a woman dressed as a devil had caught my eye. Now, in the final version of the painting she moves to the foreground of the picture plane to watch a man placing a candle on a Tapete sand sculpture. This sand sculpture was made by a women’s group to commemorate the ‘Mujeres Lilas’ or ‘women of the lilies’ who had been murdered in the state of Oaxaca every month; 42 on average. Femicide is a shockingly normal occurrence in Mexico. After many reworkings of the composition the woman dressed as a devil moves from the background to the foreground. The costumed woman I had seen at the cemetery becomes a symbol of a woman personified as a devil. She looks on in despair the sand sculpture map- a revelation of the shocking extent of violence inflicted on the vulnerable female population within Mexican society, violence perpetrated by male domestic abusers and darker forces at work within Mexican society. 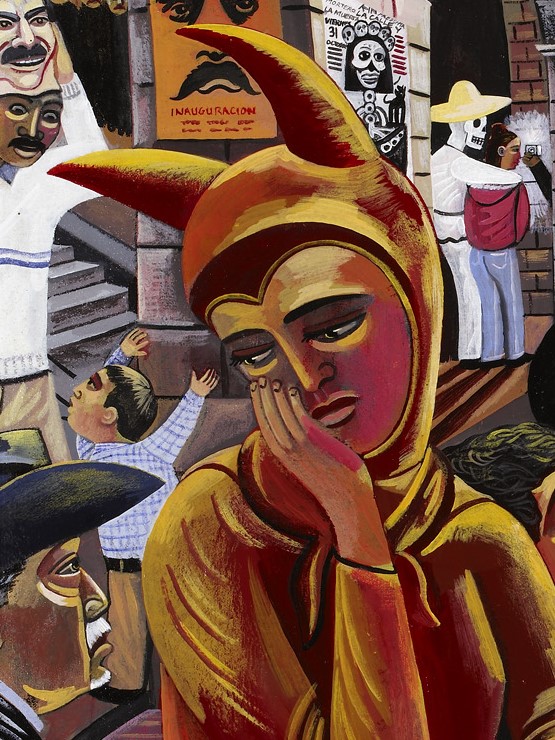 In my painting a man in a wrestling masks walks by and an elderly lady teases her son dressed as a skeleton as they sit on a tombstone. I wanted her to appear to be mocking death. Diego Rivera overlooks the scene, brought back from the dead by this artist to give thanks for the murals that he left us. Dracula stands behind him and a family leave offerings for the departed spirits of their ancestors in the candlelight. Standing under our constellations, Aquarius and Sagittarius, my wife and I watch the scene amongst a crowd of Oaxacans next to a tree, the tree of life, as a baby howls at the pain of the world it has entered. My friend Michael Holland sits contemplating the music in the corner of the painting. A father dons a rubber mask of the head of President Fox, scaring his son in the process. Zapata watches disapprovingly. The grim reaper is stalked for another photo call. All the while the music ascends to the heavens and to the dead ancestors lying entombed in the walls (Perpetuidad, Perpetuidad, Perpetuidad….). A father and son team duet in the string section and a boy peers in wonder and trepidation into an empty tomb to see only a gecko resting inside. His sister scatters a trail of marigolds on the tiled floor as she follows him to stare into the darkness.

I was reminded of Philip Guston’s portraits by the hooded masked person dressed as a Spanish Nazareno penitent. I am wearing my metaphorical artist hood, trying to hide and blend in to the shadows to memorise this scene. Next to the penitent, a man sleeps; his mask has fallen and dangles below on an elastic string. For the Aztecs, life itself was seen as a dream- a mask- death is the only truly conscious state. Because death is awake this night I‘ve put a moth where the flickering mind inside the skull would be. I glued a real dead moth on the painting, but it fell apart before I could varnish it.

An owl, for some a symbol of death, flaps across the sky startled by the fireworks. Life is a fleeting precious thing and the natural order of everything is reversed here. Aztec ancestral worship and Spanish Catholicism coexist in harmony. A dark empty cemetery is lit up with people, music, colour, humour, love, sadness, grief and all the things that make us human and alive. The ears of the dead- always close to us- have been tickled and and poked by the music and rhythm of the living, in perpetuity. Perpetuidad, Perpetuidad, Perpetuidad…….. 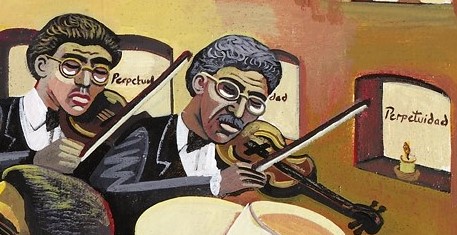 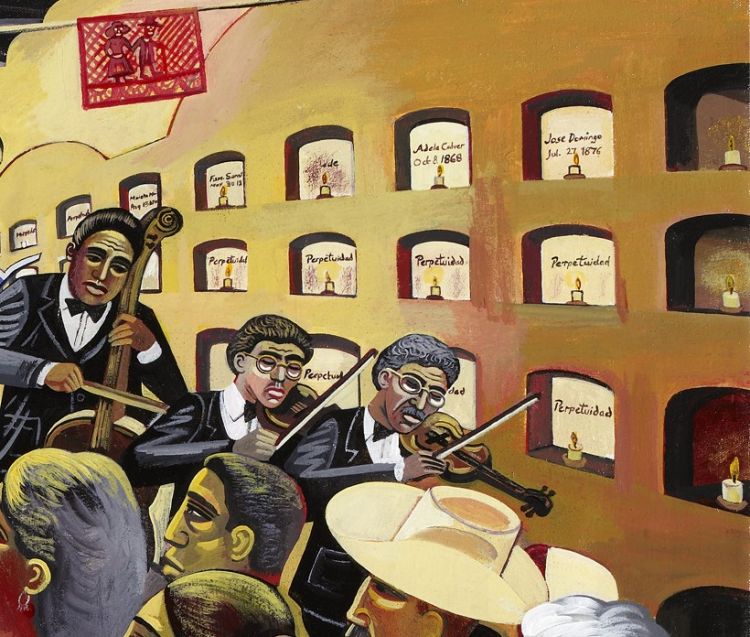 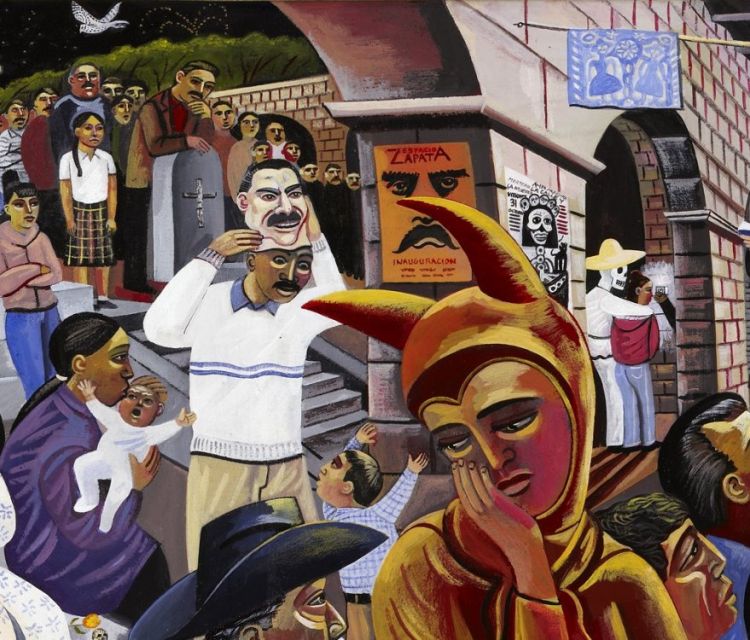 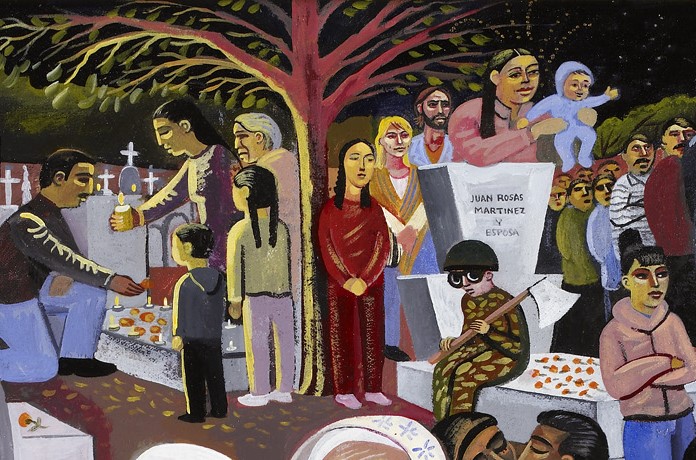 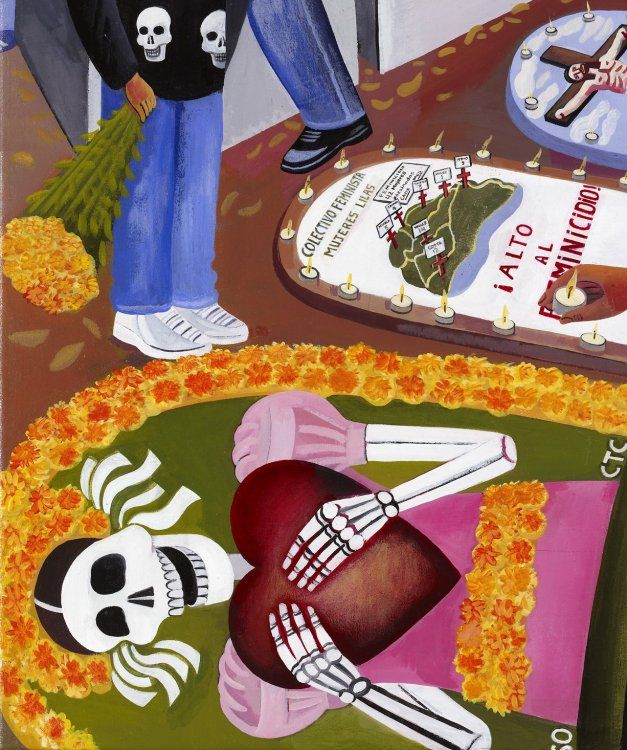 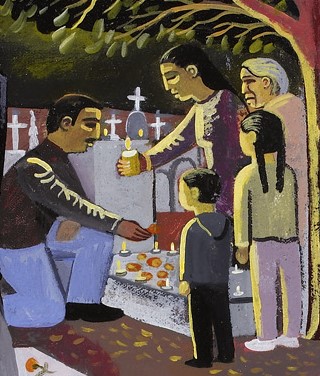 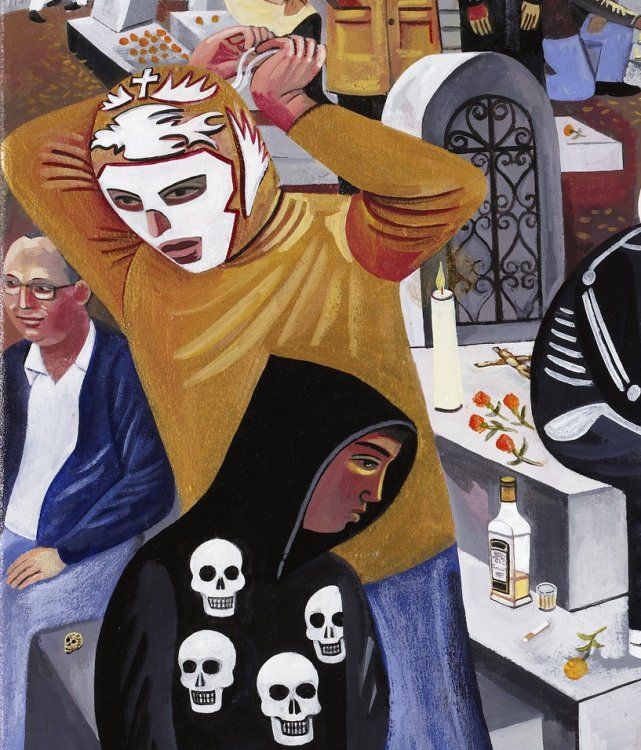 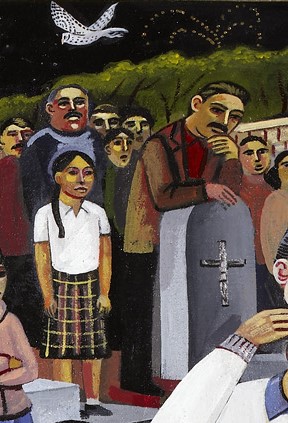 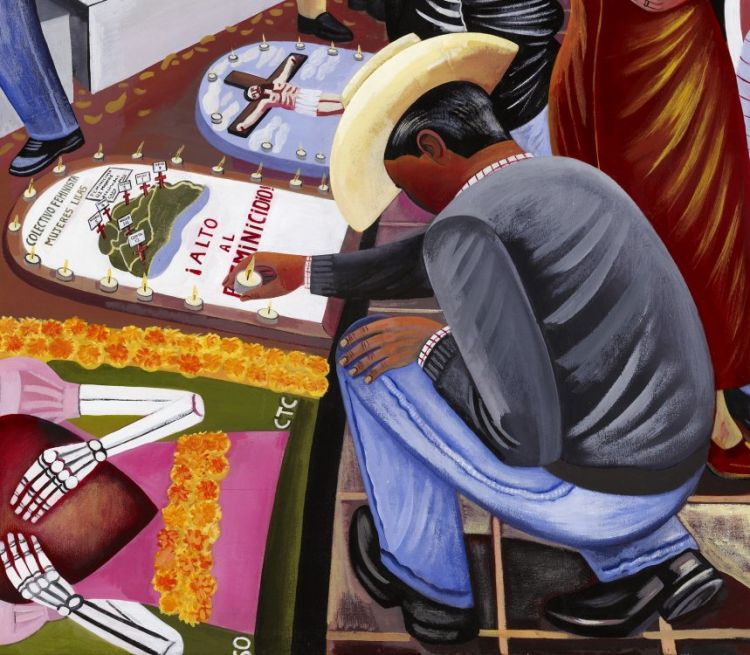 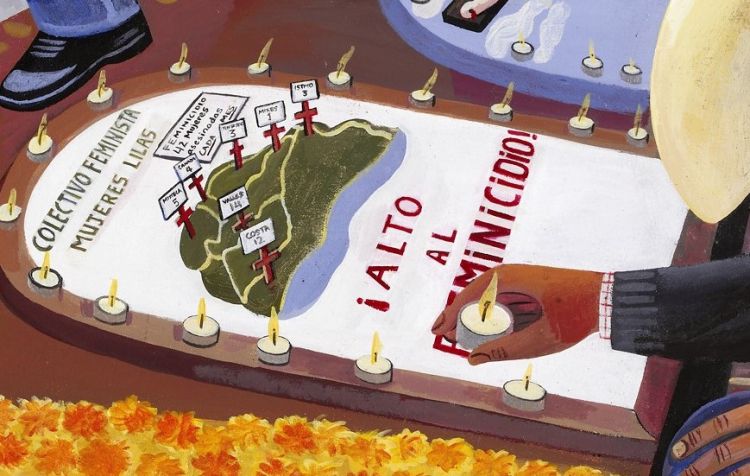 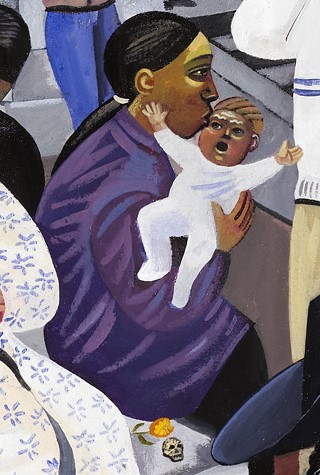 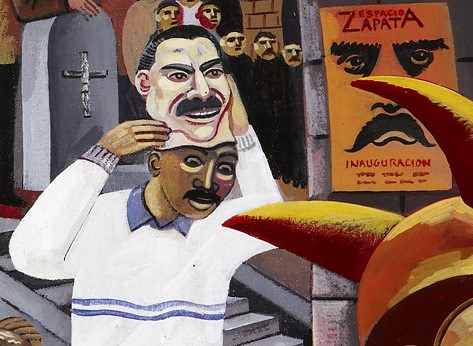 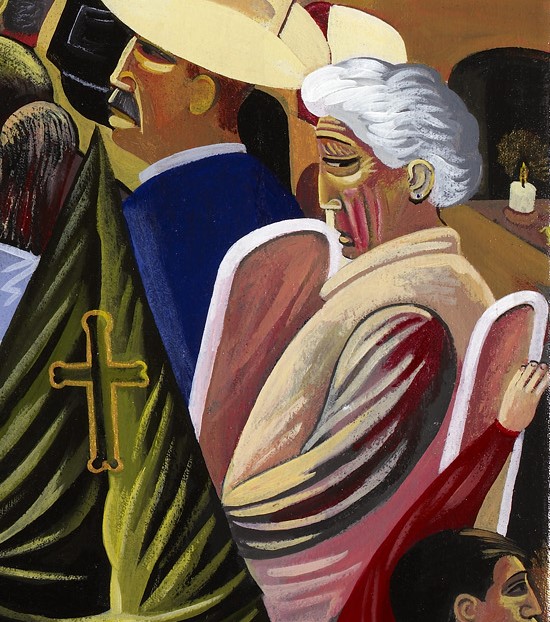 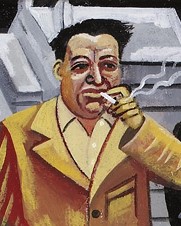 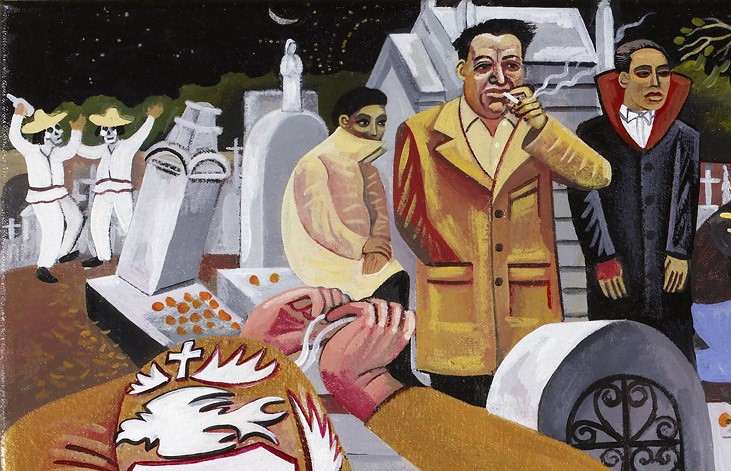 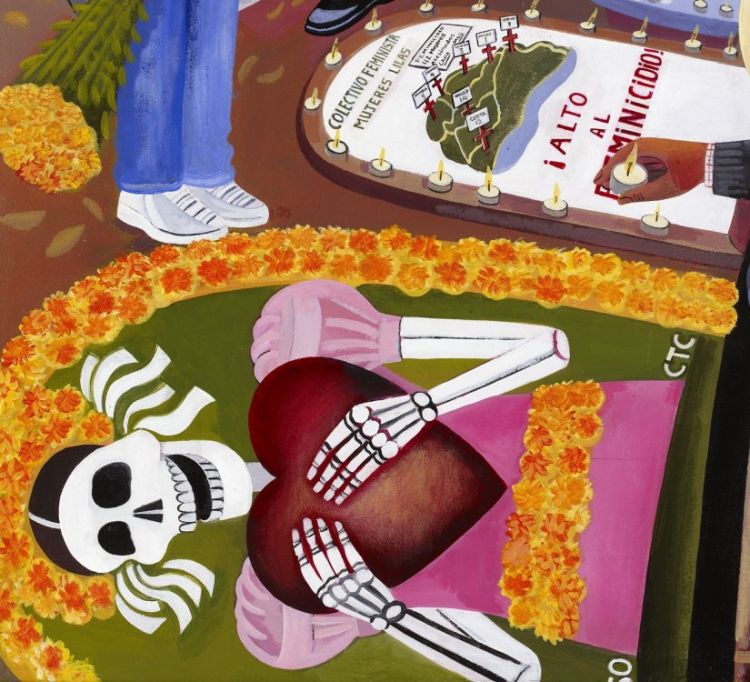 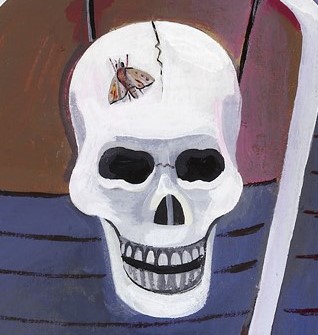 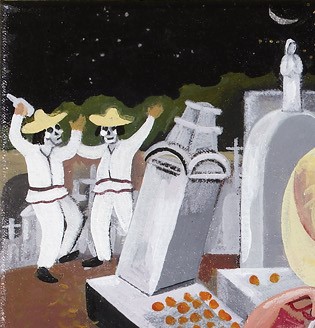 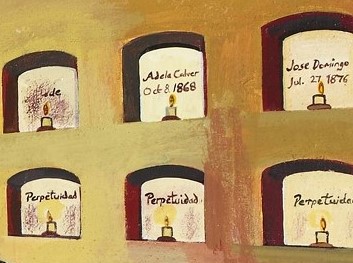