The GX Gallery Newsletter
Another Mexico: Reflections on a forthcoming exhibition by Ed Gray
January 2009

I am standing sketching in the square drawing the widest tree in the world, a 3000 year old Cypress, in a town called El Tule (The Tule Tree) in the state of Oaxaca in southern Mexico, lost in the dancing of my pencil on the page of my sketchbook when the explosions happen. Not your average firework but a series of ear splitting booms that jolt me from my reverie. Then the mariachi band strikes up an enthusiastically discordant rumpus, with each player attempting to get through the number before the others. As I look around wondering whether I can quickly capture the musicians before they shuffle on, I notice the group of children peering at me. I show them my efforts and with the turn of each page they shout a gleeful ‘Otro!’ (Another!), followed by an exhalation of ‘Ahhhh!’ when I comply. And yet again in this wonderful country I feel inadequate in my role as an artist- there is too much life for me to record here between these thin silent pages.

How did I come to be here in Oaxaca being aurally assaulted in these various ways? This trip is about finishing up old tasks, as my fortune cookie indicated in the Peking Duck restaurant in Chinatown, NYC, on route to Mexico. Seven years ago whilst working as a young secondary school teacher in Peckham I had been offered the opportunity of working as an artist full time on a residency in Bermuda. My school granted me a sabbatical and after two exhibitions in Bermuda I had earned enough money to pay for my girlfriend Ingrid and myself to travel overland from Panama to Mexico. I revelled in the new sights and experiences and my sketchbook soon became a book stuffed with small paintings. Upon reaching Oaxaca however, I ran out of paint, and money.

Some seven years later, newly married, Ingrid and I were in a position to return to Mexico to live and work. Long days and late nights spent working on 5 shows of London paintings at GX Gallery were beginning to take a mental and physical toll on me. I began to yearn for the freedom of the road and new sights. I began to paint wings as symbols of transcendence, wings of desire. I felt the need to experience again the world outside that London eternally suggests and teases us with, through trade, diet, art, architecture and the people that fill her streets.

After two weeks spent feverishly drawing characters on the choking fume filled streets of Mexico City, making friends with fishmongers, butchers and florists in the markets, attending a secret Sioux Indian Sundance ceremony, and working on my drawings in hotels in the evenings, I caught a real fever. Eventually after some lost days we went to encounter the ghosts of ourselves in Oaxaca.

The second problem we encountered in Mexico was finding materials. In Oaxaca Ingrid used her Spanish to its full extent and managed to procure wood in the timber yards, probably the first blonde Swede to do so, much to the bemusement of the wood merchants. I learnt the Spanish for staple gun (Grapadora) and how to mime its use without causing offence.

Over the following 5 months I condensed my sketchbooks and ideas down to a street scene, a cafe scene, a market scene and a Day of the Dead scene and these paintings have materialised before my eyes. They are not the final statement I could make about this country at this time, they are merely an attempt to capture my love for the resilient, warm romantic Mexican people and their long held strong cultural roots. In particular, I have seen their desire to triumph over adversity, good against evil, played out against corruption at all official levels, violent and powerful drug cartels and grinding poverty. I hope in some way my work captures something of the beauty and tragedy of Mexico. 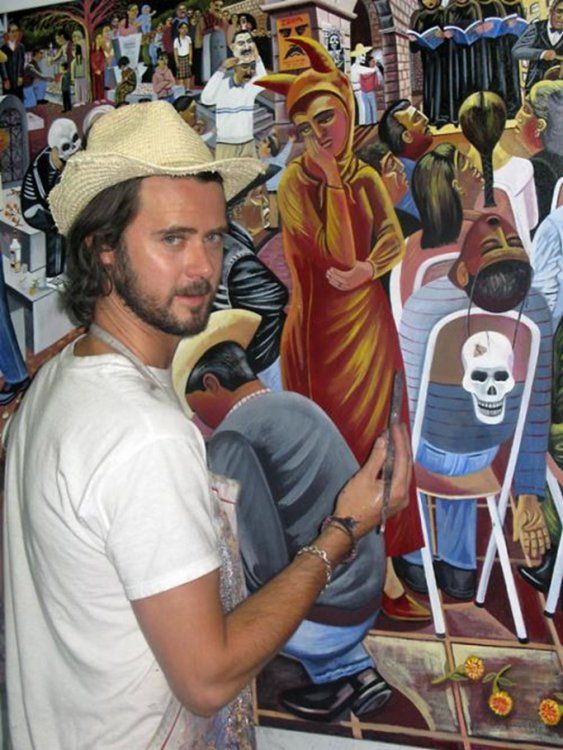