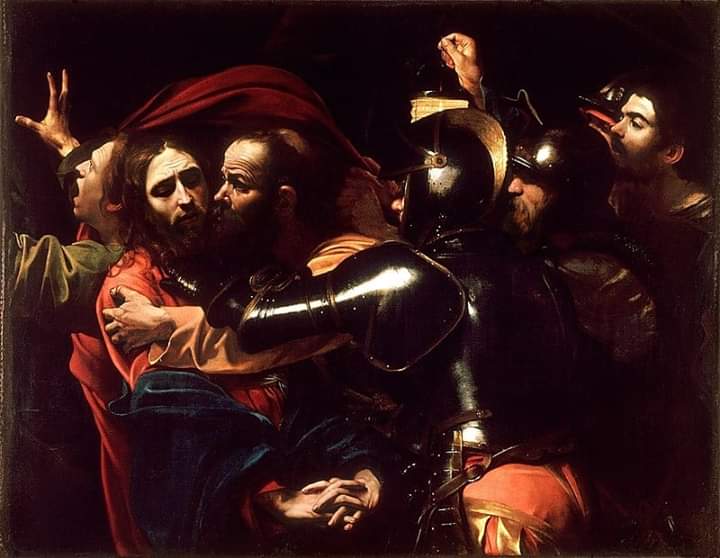 ‘The Taking of Christ’  by Caravaggio

Judas identifies Jesus to the authorities with a kiss. Caravaggio puts himself in the picture, far right side stepping into the scene, joining the action at the same moment that we walk up- he’s a witness to darkness, just like us. In his hand he lifts his only weapon, a lantern of man made light. Here is an artist who is looking to the light and reflecting light by his only means- paint and canvas- and he represents St Peter who would first betray Jesus by denying him and then go on to bring his light to the world.

On the other side of the painting is an opposing action: St John attempts to escape in terror and a soldier snatches him back.

John’s action contrasts with the entrance of the artist and his lantern; the point is hit home hard- piercingly so- even a sinner one thousand years after the resurrection has a better understanding of Christ than does his friend.

Just to make sure that we get the point, Caravaggio hits another nail in. Look at the armour (it’s impossible not to) and you’ll see there’s not a scratch on it. No self-respecting soldier wears armour as unscathed as that, polished up like a mirror maybe- Italians have always been known for their sense of style- but scratch free? Here indeed is a mirror to reflect the viewers’ own part in this act: ‘Sinner! You DID this!’ a silent voice shouts above the frozen noise of the grabbing forms forever stuck in the claustrophobic amber of this monumental moment, now reduced to a scuffle in an alley.

But it’s bigger than that, bigger than life in fact. Imagine someone gazing at this painting in a darkened chapel, lit by candles,  the painting seeming to flicker and move again, light bouncing back out of the looming luminescent forms as it reminds that awe filled viewer. A new silent voice is heard: ‘Sinner, You DO this!’ And you do it every day don’t you?

Caravaggio has brought his multi faceted reflection on mankind’s embodiment of the polarising emotions of existence to our eyes and then directly through to our hearts. The complex duality of a coexisting light and dark soul has never been so powerfully depicted. Art offers a kind salvation for Caravaggio perhaps; eternal truths, harmony and balance and work made in the service of a man’s god by one of his own sinners, a Neapolitan street brawler, a murderer, a man who had positioned himself far from that god as he slept with men and women and prostitutes.

A cardinal’s secretary wrote about one his paintings:

‘One would say it is a work made by a painter that can paint well, but of a dark spirit, and who has been for a lot of time far from God, from His adoration, and from any good thought’

In this painting Caravaggio is speaking as much to himself and reflecting upon his own torments as he is addressing his audience and us today. His is a voice that thunders and once heard it can never be forgotten.