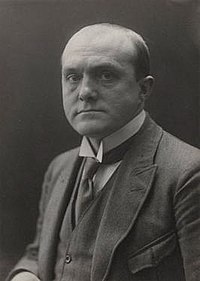 ‘Freedom is the one thing that matters – it is the departure, the new start.’

Those words were written by Max Beckmann, who was born in Leipzig on this day February 12th 1884 in reference to his 1932 triptych Departure which can be seen at the Museum of Modern Art New York.

Beckmann’s early paintings are well executed conventional depictions of the society around him. A historical painting ‘Sinking of the Titanic’ 1912 reveals more of the direction in which he was heading and introduces one of the main recurring themes in his work- the boat.

Beckmann initially  used the structure of the boat as one that contained and confined his figures within the vast eternity of space. Eventually it became a place of safety for his figures and a symbol of departure for new horizons and ultimately freedom itself, as he sought refuge and sanctuary in the great democratic experiment that is America, the ‘sweet land of liberty’. 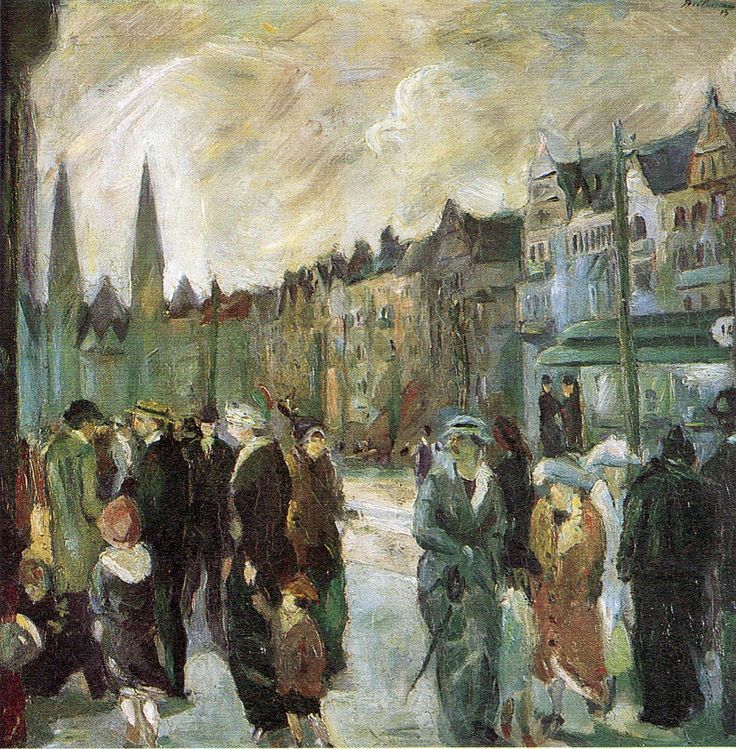 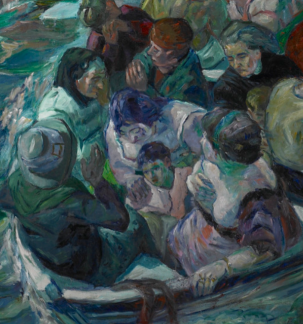 Sinking of the Titanic detail 1912 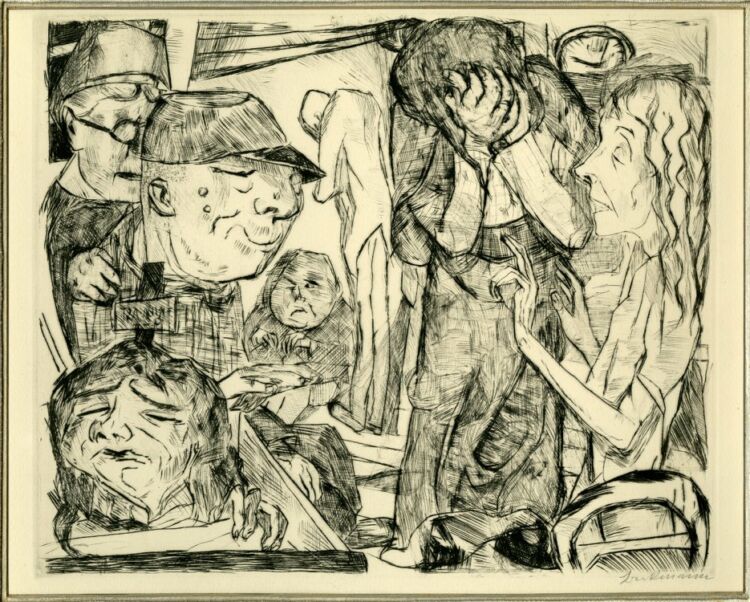 ‘On my left the shooting had the sharp explosion of the infantry artillery, on my right could be heard the sporadic cannon shots thundering from the front, and up above the sky was clear and the sun bright.’

Young Max Beckmann had seen all the reality he could take as a medical orderly on the claustrophobic killing Fields and trenches of the First World War. These experiences revealed to Beckmann the distorted truths that societies surround themselves with and the barbaric lengths they will go to in order to protect what they value most.

This skewed perspective translated into a new pictorial language within Beckman’s canvases. He had found a new sense of freedom by fragmenting the space within the canvas:

‘Height, width, and depth are the three phenomena which I must transfer into one plane to form the abstract surface of the picture, and thus to protect myself from the infinity of space.

‘I think only of objects: of a leg or an arm, of the wonderful sense of foreshortening, breaking through the plane, of the division of space, of the combination of straight lines in relation to curved ones’.

Sailing into the mystic

Beckmann’s search for freedom within the space of the canvas is not purely a technical conceit. For Beckmann it took on a deeper spiritual, mystical meaning,

“My heart beats more for a rougher, commoner, more vulgar art … one that offers direct access to the terrible, the crude, the magnificent, the ordinary, the grotesque and the banal in life. An art that can always be right there for us ,in the realest things in life’

‘Space, and space again, is the infinite deity which surrounds us and in which we are ourselves contained’

Beckmann enjoyed great success as an artist during the years of the Weimar Republic. He taught at the Städelschulec Academy of Fine Art in Frankfurt. And received the Honorary Empire Prize for German Art in 1927. His painting The Bark was bought by the National Gallery of Berlin. 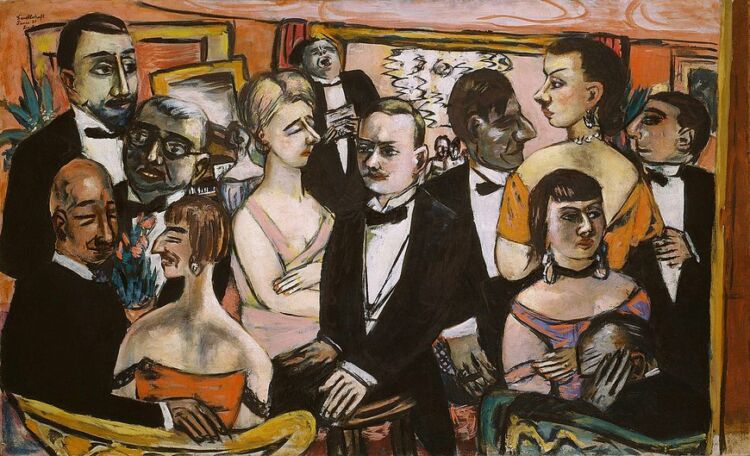 Blinded by the life

‘Painting is a very difficult thing. It absorbs the whole man, body and soul, thus have I passed blindly many things which belong to real and political life’

Beckmann wrote those words just as Adolf Hitler was rising towards power and the horror of genocide that lay ahead. Hitler achieved his aim by exploiting the will of the people with a poisonous concoction of the politics of grievance, nationalism, media censorship, military parades and bully-boy tactics from booted street thugs. Little by little he had corroded decency, civility and ultimately democracy with the messages Germany First and Make Germany Great Again.

Beckmann was now cut adrift from his home country, isolated and alone and seeking refuge from the deluge of fascism that had drowned his country. Hitler had labelled him a Degenerate Artist and the censors bound and gagged him, preventing him from revealing his truth with his brushes. 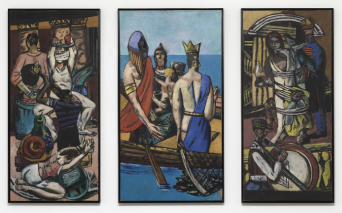 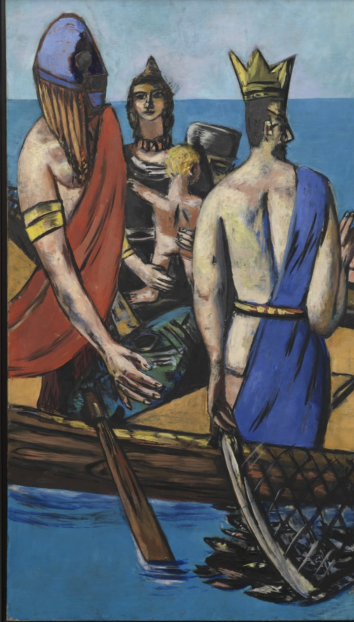 Freedom is just another word for nothing left to lose 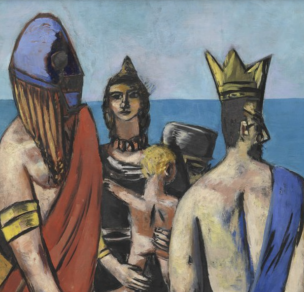 In the central panel of Departure the family group express great optimism. Their fishnet is full. The glinting crown is prominent. Our eyes are led to the child looking to sea, to a new beginning. The hooded figure is perhaps a reference to Acheron leading the family on life’s journey towards inevitable death but there is no real menace, instead there is an acceptance of fate. This group of migrants are far removed from the unfortunate passengers at the mercy of the freezing ocean in Beckmann’s early painting of the Sinking of the Titanic.

Beckmann described the central scene in Departure as a ‘homecoming’ in a letter, explaining that

‘..The King and the Queen have freed themselves, freed themselves of the tortures of life – they have overcome them. The Queen carries the greatest treasure – Freedom – as her child in her lap. Freedom is the one thing that matters – it is the departure, the new start.’

This is an image of hopeful fortunate migrants sailing calm seas, fleeing persecution for a new free from persecution. They are exchanging powerlessness for power as King and Queen of their own destiny. Nothing can ever be as bad as the horrors they have experienced. Either a new life starts here and now, or there can be no life worth living at all.

Spying the horn of plenty 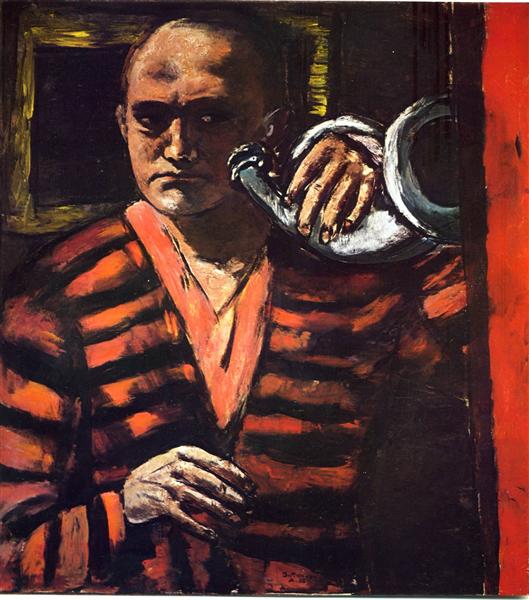 One of the many frequent symbols that crop up in Beckmann’s work are telescopes, musical instruments and horns.

A telescope inspires us to look beyond ourselves, to reflect deeply on the space that surrounds all things. As entities we are composed of spaces and simultaneously surrounded by space, and yet all of our own personal space is contained within the confines of our imagination, within the dimensions of our own skulls.

Beckmann encourages us to break this space, to fragment the illusion so that we may reconstruct our reality and instead set a new course for freedom. None but Ourselves can free our minds, but be sure to keep a look out with your telescope and be watchful for those that might be watching us, darkly intent on curtailing our freedoms.

Beckmann’s musical instrument motifs are perhaps a celebratory blast at the walls of Jericho in the name of freedom? Maybe a celebration of the artist’s role, a musician or painter uniting others with sound and fury? Let freedom ring!

Or could these instruments be about to sound a warning note or even a bugler’s Last Post played out in remembrance of those that gave their lives so that we might live in freedom?

Beckmann certainly knew that freedom was the one thing that really mattered- he knew it as the Nazis took his job as as the art teacher at Frankfurt College of Art, he knew it as he and his wife Quappi departed first for Berlin and then to Amsterdam where he was exiled for 10 years. Eventually they would find freedom, but only once they had migrated to New York in 1948, to the ‘asylum for mankind’ that Thomas Paine spoke of back in 1776.

America was good to the Beckmann’s but the strain was too much. Soon after arriving in America Beckmann died from a heart condition in 1950 on the corner of 69th St and Central Park West. According to Quappi he was on his way to view one of his own paintings in a gallery. 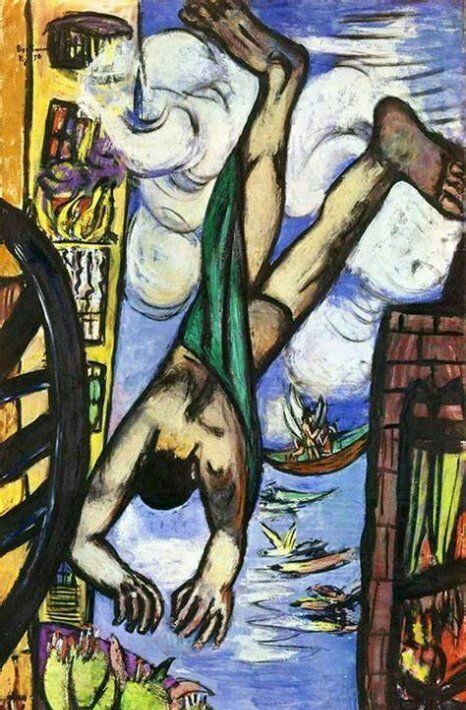 First we take Berlin, then we take Manhattan

First they come with insults for the immigrants. Difference is an easy target to scapegoat. They take the homosexuals and finally the artists, musicians, playwrights and professors. The theatres darken and the university lecture halls empty as they crush the media. Lastly they come for your soul or they send you to a correction centre if you won’t give up your freedom willingly. It is the old authoritarian story from the Dictator’s handbook, the struggle to suppress democracy and freedom. It is the story that encompasses Beckmann’s life and art.

With all this in mind, Beckmann wisely added a coda to the quotation that began this post,

Indeed it can be applied to all times. Just look closely at the bound and gagged figure in the left panel of the Departure diptych and you will notice that he has bloody stumps for hands. Here is someone who will never paint or write again. Here is the murder of Washington Post journalist Jamal Khashoggi by a Saudi hit squad, here are the torturers in the Xinjiang Uighur re-education camps.

Half-lit and lurking in the darkly painted corners of Beckmann’s painting are the poisoners and jailers of Russian opposition leader Alexey Nevalny and the kidnappers and official thugs suppressing protestors on the streets of Belarus and Hong Kong.

Playing out before us in these canvases is the banality of barbarism, the weary guard going off duty, the concentration camp auditor working late into the night.

Beckmann’s work shows us those who were present, all the enablers of this horror are here. What is left to our imagination, to our shame, are the absent ones, those who looked the other way and those who created the scene he sets before us. 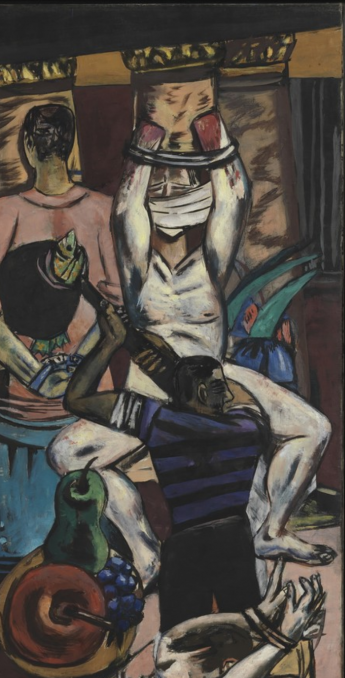 And over there, pitch black but for the glow of the mobile phone in his hands, sits a president with eyes glued to a TV news channel. He’s tweeting to a mob, inciting them to attack a government building. And here they come right on cue, nooses, baseball bats, zip cuffs and stun guns in their hands, flooding through unfamiliar corridors, hunting down their elected politicians.

Max Beckmann knew this scene very well. He understood that a locked door to the freedoms that democracies take for granted is only ever just a few steps away. 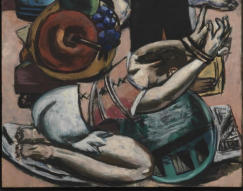 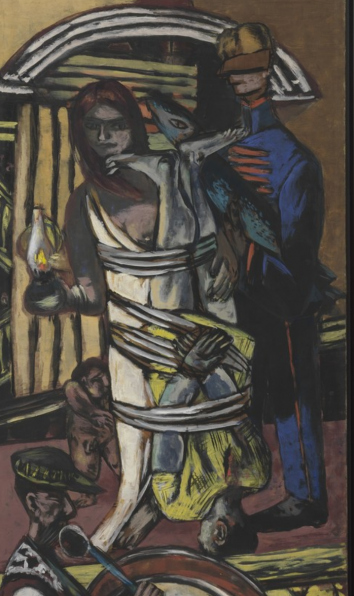 America (My Country, ‘Tis of Thee) by Samuel Francis Smith:

‘My country, ’tis of thee,
Sweet land of liberty,
Of thee I sing;
Land where my fathers died,
Land of the pilgrims’ pride,
From ev’ry mountainside
Let freedom ring!’

My country, ’tis of thee,
Stronghold of slavery, of thee I sing;
Land where my fathers died,
Where men man’s rights deride,
From every mountainside thy deeds shall ring.