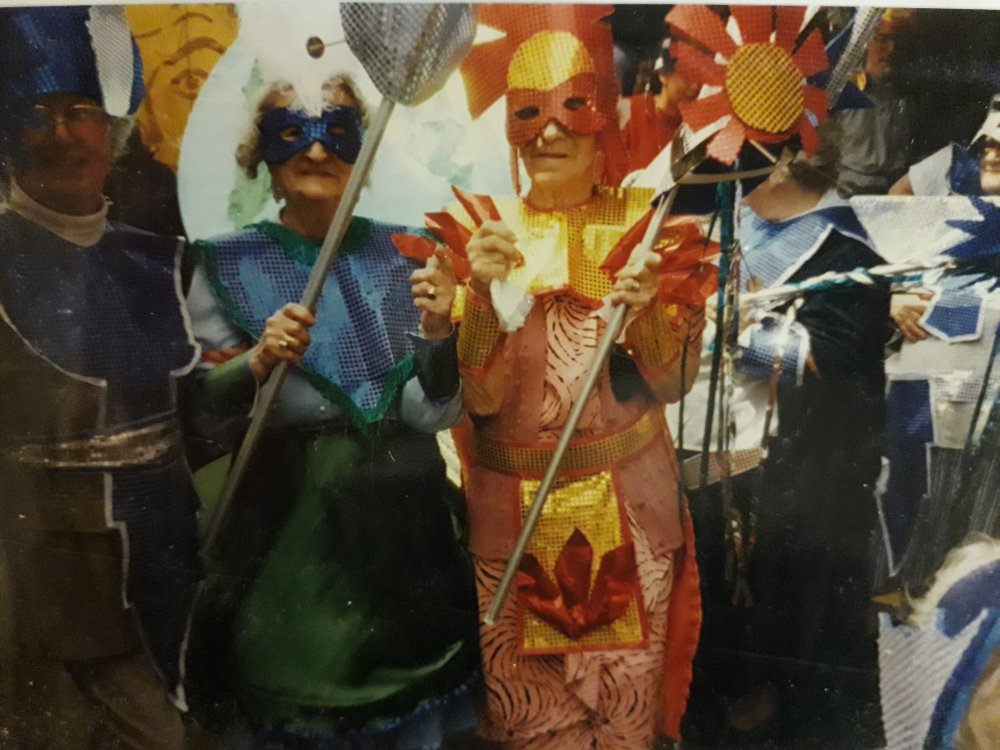 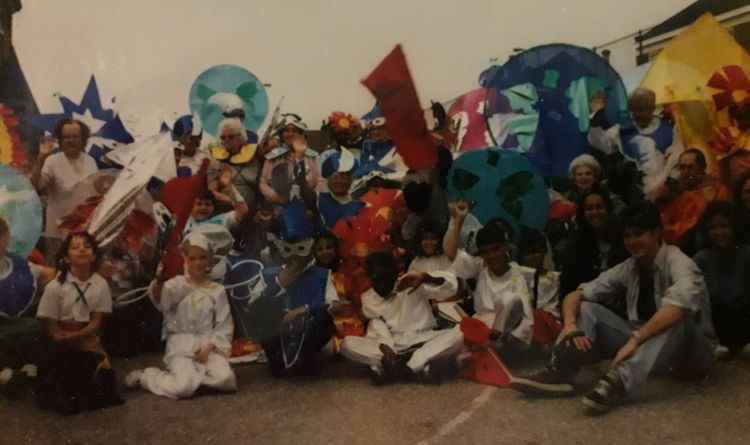 Magic: That was the word that first caught my eye in the job centre advertisement for the project manager role at Magic Me, unpaid but with travel costs which was good as the commute was the other side of town. I’d gone to art college in search of magic and I’d found it, but not the kind I was expecting. So now here I was a newly qualified Fine Art graduate who had tasted the magic of creativity, somewhat slightly dazed, standing in a job centre.

My earliest memory of magic had been watching a schoolmate who could draw. He was drawing people, his pencil dancing, transforming paper into white space as it went, seemingly pulled along by the line he was sketching. It was as if you knew what he would draw before it was there in front of your eyes .

There wasn’t much room in art college for the outside world. And yet the faces of the people of the outside world was all that I ever wanted to paint. Thoughts of what would happen when our student grants ran out (golden days) and we would be cast back into that real world where never aired in Tutorials , intensifying the magic of our shared experience. And so I left the cocoon of art college unravelled and with that magical feeling of nowhere to go. I worked any job I could find, determined keep painting. I found a studio in a squat and I started to volunteer running an art room at a youth club where I worked with children who were restless to dance with the creative magic in their bones. It was then that I found Magic Me. In my naivety I didn’t know that places like Magic Me existed back then. Here was my belief that participation in art brings people together made into 3D. A place who’s purpose was to break down barriers, create new possibilities and celebrate collective experience. The magic of the real.

The first thing I noticed about Susan Langford the director of Magic Me was the electricity in her sparkling blue eyes. The second thing I noticed was that she was very serious about her work and very determined. The third thing I noticed was that she trusted me to write reports, talked me through funding application and trusted me to deliver a project. I had little confidence in myself, preferring the quiet of my artistic practice to the rush of thoughts in my head that public exposure entailed. I had always been the quiet watchful kid at school, not wanting to impose my thoughts on others because, what did I know? The world that had revealed itself to me in my youth was one of unknowable uncertainty.

I liked the calm caring and confident way Susan spoke to the pupils at the partner school we visited, giving everyone a voice, the ‘Me’ in Magic Me which really means ‘Us’ because the two are inextricably linked. One is nothing without the other.

My first role at Magic Me was to oversee the preparations for a carnival on the theme of ‘The Planets’ in Clapton which would be a partnership between Northwood School and The Sam and Annie Cohen Day Centre.  I had some familiarity with caring for the elderly. I’d watched my own mother dedicate herself to looking after my grandmother  who had been living at our family home since we were kids, but it was only recently that I had become interested in hearing about her life as a girl in the first world war. I knew how her eyes lit up when she unlocked stories and became again the young girl she had been working in Tickler’s jam factory in 1914.  And so the intergenerational ethos of magic me really chimed with me and when we introduced the primary school pupils to the elders Magic Me magic filled the air. Warm young hands warmed old hands and smiles filled the room. There was the Magic. We were getting ready to launch into space.

My partner in crime and overlord on this project was to be Mr Lincoln Rahamut. Lincoln had voodoo magic to protect him in his car in the form of a doll. He is a celebrated Trinidadian carnival designer and immersed in the magic of Carnival. I had always loved carnival. I learnt how to build an idea into a 3D carnival piece and I gained a good friend. Years later I would make a painting of the crowds at Carnival with Lincoln making a cameo appearance in it, heading up the parade.

On the day of the Sam and Annie Cohen Day Centre and Northold School Carnival Roads had been closed temporarily and there was truly a buzz of otherworldly magic in the air. Elderly Clapton ladies and gents dolled themselves up in sparkling gold and silver costumes alongside their new smaller Northwaldian friends. The sun shone and the residents of Clapton looked on squinting through bemused expressions that transformed to celebratory ones as we paraded through them.

Generations mingled, races and creeds mixed, London life in all its guises, and my Mum came along as photographer. I was given a camcorder and tasked with making a film – one job too far for me as I managed to mostly film the pavement.

There was a genuine bond between school pupil and elder, united in their space costumes- a warmth that comes from a shared magical experience. The elders knew they wouldn’t see the pupils as much after the carnival and were genuinely sad. I was surprised at the emotion I felt.

My time at Magic Me had helped me to believe that I had the confidence to become a good teacher and I began to see that I could find a way to hold onto the magic of being an artist. I had some way to go but I had somewhere to go. The ‘Magic of Me’ had become the ‘Magic of Us’ as it would for so many people for many years to come. 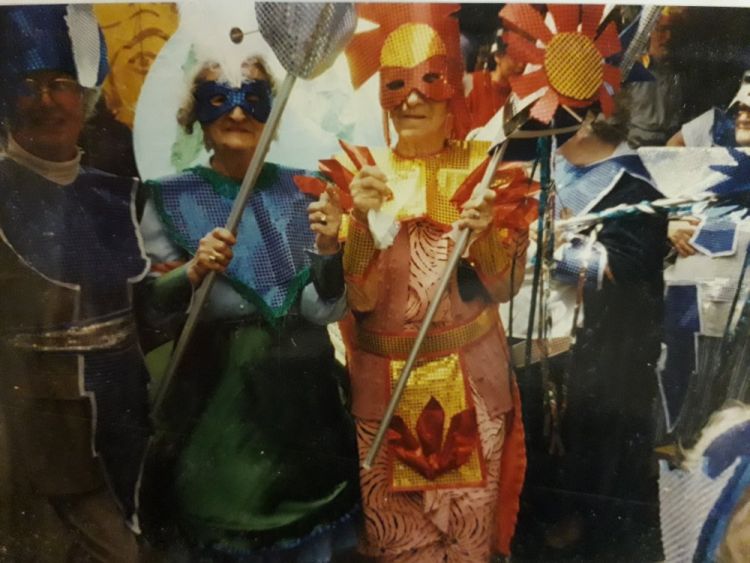 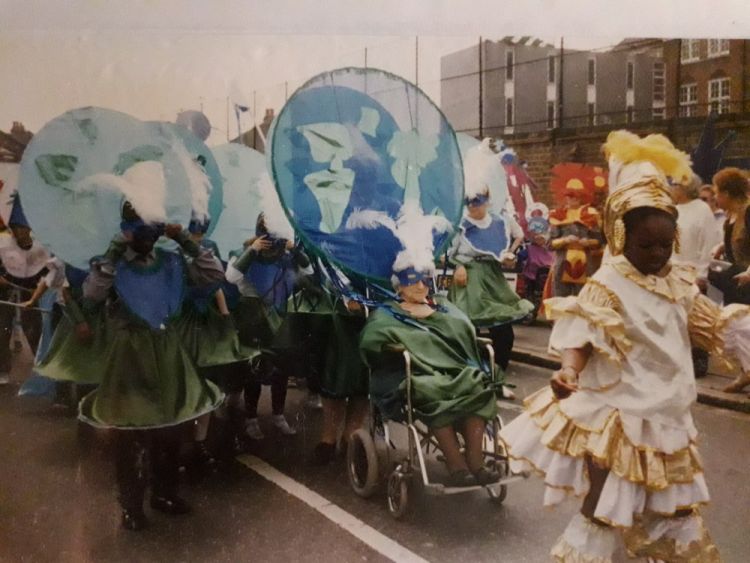 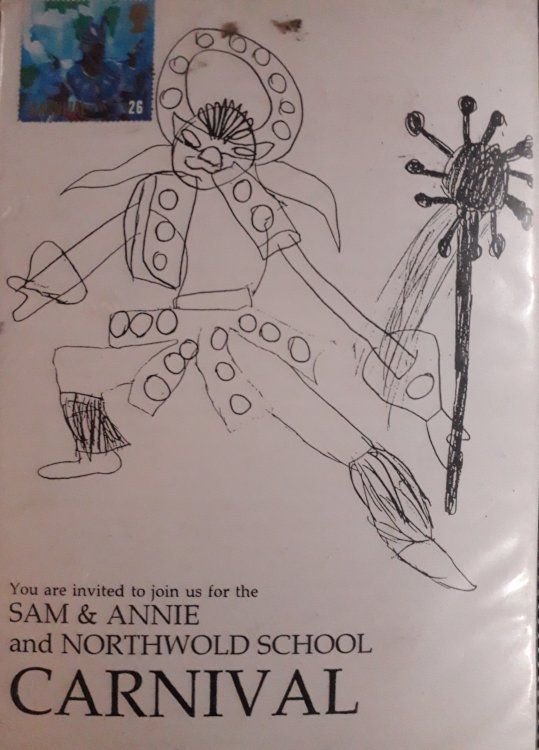 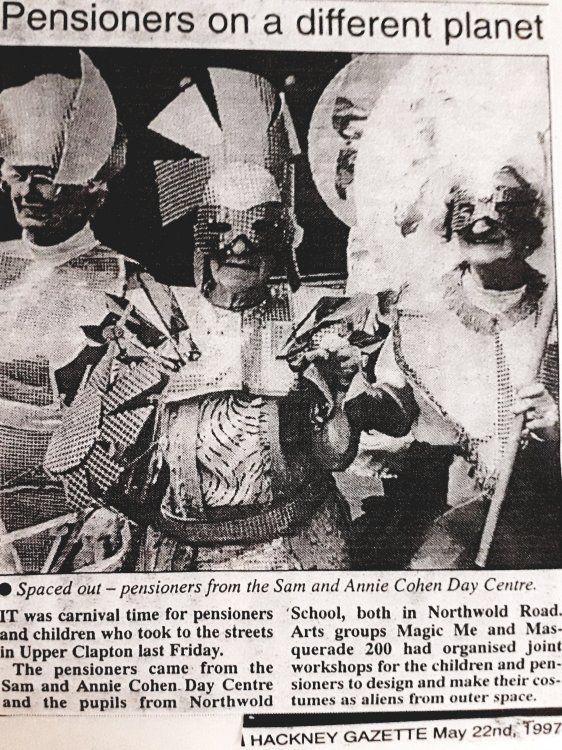 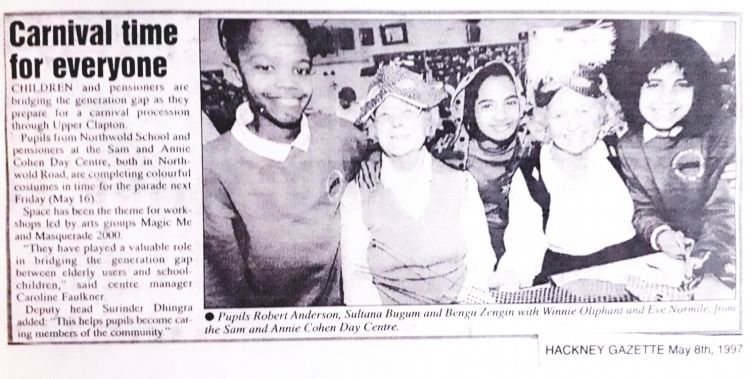 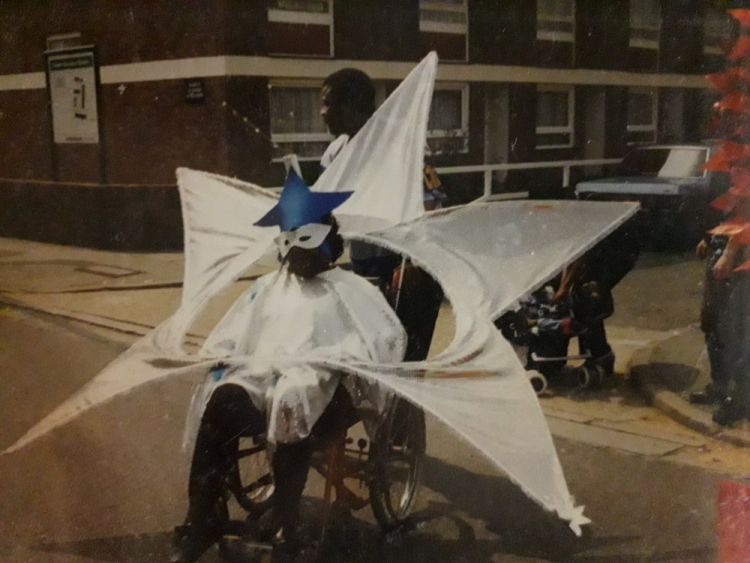